The clothes were sleeker, cleaner and more grown up than they have been in recent memory. 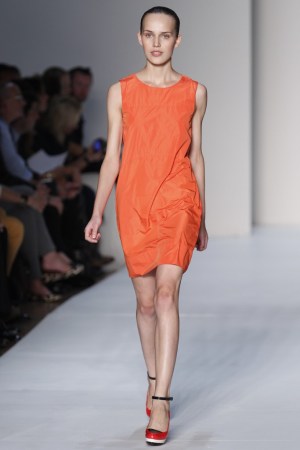 With the main Marc Jacobs collection displaced by Hurricane Irene, Marc by Marc Jacobs found itself bumped into the big kids’ spot — Monday, 8 p.m. at the Lexington Avenue Armory. Same venue, same show, but there was a major shift in energy. People were geared up for the night, a mood not typical of Tuesday afternoon, when the show is usually scheduled. And, though it was most likely pure coincidence, the clothes had a new attitude too. They were sleeker, cleaner and more grown up than they have been in recent memory. Marc by Marc has a new groove.

The word Bauhaus appeared in the description of several items on the shownotes, and, indeed there was major minimalism going on in silhouette and color — solids and neons. A boxy electric orange top was worn over simple navy shorts, and a fuss-free shift dress that had a navy top and green skirt. It was plain yet powerful, and often playful. No one designs a high-heeled hightop with a straight face.