The designer is focused on one thing: top-notch tailoring that flatters the classical lines of the male silhouette. 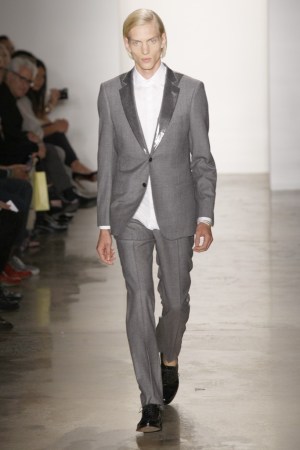 Leaving hipster takes on proportion, draping and dropped crotches to other designers, Simon Spurr is focused on one thing: top-notch tailoring that flatters the classical lines of the male silhouette. This season, he took that clearly defined aesthetic and added some downtown elements, like mesh layering and geometric, graphic stripe patterns on knits. Some suit jackets had mixed-media contrast sleeves in leather, giving a motocross edge to the formal look. They might not sell like hotcakes at retail but the details added a nice rock ’n’ roll edge to the clean-cut show. Still, mesh tank tops and all, the collection was a clear showcase for Spurr’s English roots, seen in hunting elements like riding boots, quilted outerwear and shirts with gun flaps.