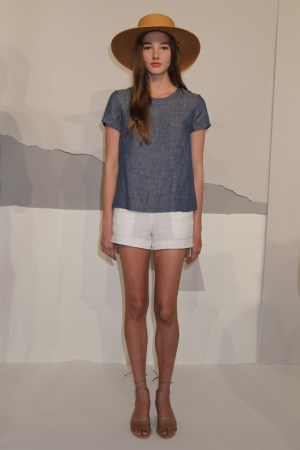 Rooted in Sixties Americana, Steven Alan’s spring collection took a nostalgic turn that resulted in looks such as skinny pantsuits (for both men and women) to day dresses that read demure from the front but revealed a more daring open back to a smattering of chambray separates. Alan added that he was inspired by American artist Alex Katz’s watercolors and pointed to the men’s lightweight suits with both long and short pants as key looks, as well as woven shirts featuring vintage-inspired prints designed in-house.