The show was cohesive, moving seamlessly from motifs that included camouflage, varsity and nautical stripes. 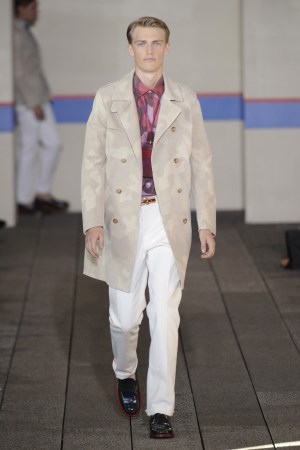 Tommy Hilfiger is a reliable purveyor of “modern preppy with a twist,” as he tends to say, but this season he evolved that ethos forward with a sophisticated and contemporary collection that avoided clichés. Staged on a covered portion of the Highline, the show was cohesive, moving seamlessly from motifs that included camouflage, varsity and nautical stripes. Hilfiger started with his love of Pop Art as the foundation of the collection. The camo theme, for example, came from Andy Warhol’s series of paintings depicting the hard-to-miss pattern. “It’s Pop meets prep,” noted the designer backstage. The result was trenchcoats, suede blazers and leather motorcycle jackets that progressed from subtle hues of biscotti to blue and then green and red, all done in a way that rendered the usually in-your-face pattern with elegance. Similarly, varsity jackets and sweaters were given a newfound polish — including hybrid blazers and denim jackets affixed with varsity jacket-style sleeves. Throughout the collection, the clean lines, slim silhouettes and tailoring — from double-breasted suits to laser-cut leather trenchcoats — gave everything an almost European élan. Horizontal stripes closed out the show, in various permutations including on sweaters, on the sleeves of peacoats and on the legs of pants.