Track pants were the favored bottom and were often layered under slouchy sweatshirts in a black-on-black color combination or in plaid or check prints. 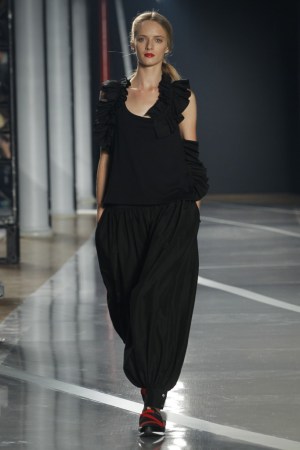 The designer was not in New York this season, but the lineup for Y-3 on Sunday was pure Yohji Yamamoto. Sure, the sporty bent that is its foundation was there (a winner in retail since its 2003 inception with Adidas), but in the face of continued challenges with his own namesake collection, it was curious how many of his black-on-black deconstructed Edwardian-style signatures showed up. Nevertheless, the result was great and is sure to be a boon for devotees. Volume was key and came in the form of ruffled shoulders, bustle back vests and full cotton skirts that were worn with futuristic sneakers and cross-body bags. There were bursts of plaid, accents of transparency and an abundance of layering that only further enhanced the designer’s odd yet appealing one-legged pants that featured yes, shorts on one leg and either a full-pleated pant leg or kilt on the other.

For men’s wear, Yamamoto took a more utilitarian approach, riffing on military-style jackets with strap accents or blazers featuring rounded shoulders and raw edges. Track pants were the favored bottom and were often layered under slouchy sweatshirts in a black-on-black color combination or in plaid or check prints that were sprinkled throughout.