Showmanship is still Pugh’s strength, if increasingly forced in this case. 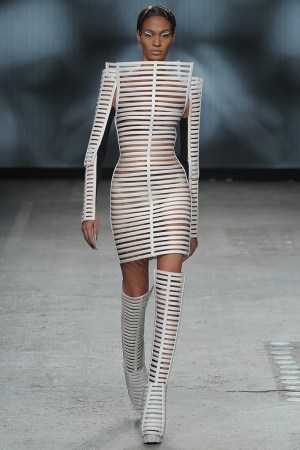 Fetish anyone? Another obsessive film by Gareth Pugh’s frequent collaborator Ruth Hogben opened his spring show. This one starred a naked Crystal Renn, who appeared to be bound and completely ferocious. Pleasure or pain? Mesmerizing in its art direction and editing, the film got your blood pumping while setting an intensely angry tone for the collection. And while darkness is Pugh’s sweet spot, this pushed it to an aggressive extreme.
The opening looks were veritable cages — coats made of stiff horizontal strips that encased the body and funneled up around the face. Whether they were meant to protect or defend, the message was imposing isolation — stay away!

Again, the hard execution was spot on, even perversely sexy as naked flesh peaked through the chinks in the armor. And some less radical fare followed with tight dresses and cropped vests. But an interlude of softer black and white striped styles — dresses and hooded robes — felt like Pugh’s obligatory answer to that looming question of commercial viability, which has yet to be reconciled. Showmanship is still Pugh’s strength, if increasingly forced in this case. At show’s end, the film screen burst into purple flames, introducing dark warriors in shiny molded coats and matching flame-shaped helmets.