Ervell is adept at injecting his signature brand of low-key cool into familiar garments, such as nylon bombers and parkas. 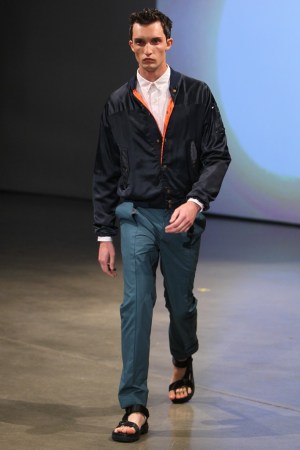 If anyone could make a Teva-inspired sandal an object of downtown style, it’s Patrik Ervell, who worked with Aldo for a nylon version of the oft-maligned footwear. Ervell is adept at injecting his signature brand of low-key cool into familiar garments, such as nylon bombers and parkas, which were inspired by popular outdoor brands like The North Face. His emphasis on shiny performance fabrics, sometimes quilted on outerwear, complemented his minimalistic take on unstructured suiting in this well-edited directional collection.

Not as successful was the small selection of women’s wear, where Ervell tends to translate his men’s aesthetic into feminine silhouettes. Sometimes it works and sometimes it doesn’t, and this season the capelike shirts in technical fabrics and oddly proportioned skirts were less than flattering.