The clothes were very tailored, with the blazer being a key focus. 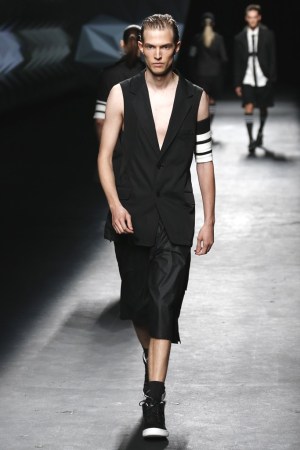 Surrounded by the scores of well-wishers backstage, Yojhi Yamamoto was grinning. Perhaps it was because he’s celebrating his 10th anniversary designing his Y-3 collection for Adidas, or maybe because David Beckham had just hugged him. Regardless, Yamamoto was excited about his spring lineup, which was brimming with great pieces. “In the world right now, fashion is sh-t,” he said. “It’s too sexy, it’s too cheap-looking. I want the future — new street fashion.”

His men’s featured tracksuits that were cut roomy with stripes on one leg — showing Adidas’ signature triple stripe in different ways was a key focus, Yamamoto said. Still, the clothes were very tailored, with the blazer being a key focus.