The French designer drew on the sailor for his spring collection of crisp cotton shirts and ethnic-flavored evening suits. 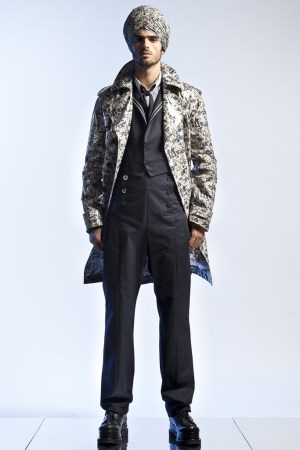 Leave it to Jean Paul Gaultier to put the kink into nautical. The French designer drew on the sailor, the embodiment of his best-selling fragrance Le Mâle, for his spring collection of crisp cotton shirts and ethnic-flavored evening suits. Variations on button-front sailor pants included a Bermuda-style version with a detachable skirt panel in the back, while middy collars sprouted on everything from sleeveless seersucker shirts to a denim jacket.

A navy cotton blazer came with tone-on-tone embroidered tattoo motifs, while tiny dark pearl studs formed dégradé stripes on a lightweight gray sweater. Gaultier also showcased his seafarer’s more worldly side, with Indian-inspired tuxedos that paired a wraparound jacket with drop-crotch pants, or a “cage” blazer with a floor-length trouser skirt – similar to the one the designer wore during his stint as jury member at the recent Cannes film festival.