The cast of youthful models raced through an industrial space wearing boxy white shirts or overcoats with drop waists. 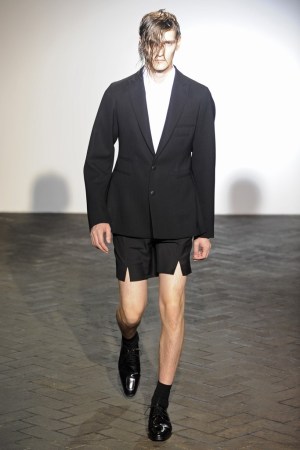 Raf Simons took elements of masculine and feminine dressing and blurred the boundaries between the two — with jarring effect. Delicate floral prints, pleating, broderie anglaise and shades of pink were applied to modern, angular silhouettes.

The cast of youthful models — sporting long, greasy bangs — raced through an industrial space wearing boxy white shirts or overcoats with drop waists, whose backs were done in floral prints and had pleated skirts.

Simons also sent out off-kilter tailoring, on the heels of the short suits he’d introduced last season. Jackets with nipped-in waists were paired with tailored shorts slit at the thigh, or pants that pooled boyishly at the ankles, worn over sneakers.

The collection didn’t have an obvious commercial appeal — particularly smock tops with eerie illustrations of women, worn like dresses — but no doubt the Belgian designer’s singular vision will have a ripple effect. Next week, Simons makes his debut as Dior’s new couturier.