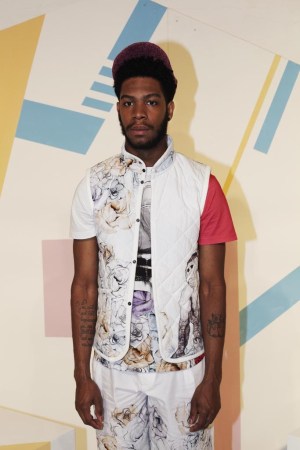 London’s hottest emerging men’s wear talents were in fine fettle at this group show. Highlights included prints from Kit Neale and Joseph Turvey and Marques Almeida’s denim. Neale’s signature vibrant prints — emblazoned across sweatshirts, jackets and trousers came in fluoro, a print “like toy road maps you had as a kid” and a “fried chicken” logo sweater. Turvey took inspiration from Ethel Mobley, the first female racing driver to compete against men. Looks mixed color blocked stripes with the designer’s hand drawn illustrations of flowers and cars and even a monkey. “Mobley’s brother used to drive in a car with a monkey in the passenger seat, and one time he lost a really big race as he had a fight with the monkey,” said Turvey. Pole position went to the quilted coats — a collaboration with British clothing company Lavenham. Meanwhile, the women’s wear duo Marques Almeida, designed by Marta Marques and Paulo Almeida, presented their capsule men’s collection for Opening Ceremony. It featured edgy camouflage print — in reality, three different washes of denim puzzled together and then thermo glued. The duo created a similar effect with a calf hair leather jacket in red, blue and zebra panels.