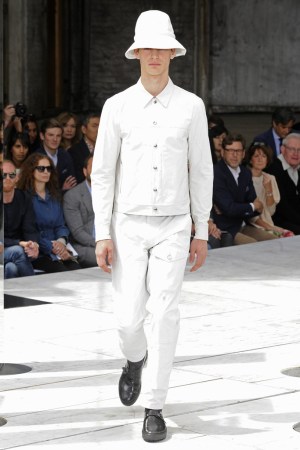 The Rag & Bone show took place beneath a specially constructed glass roof — in case of rain — in an East London courtyard. Metrological forethought aside, the real coup was the stage set: a phalanx of 20 mirrored panels synchronized to swivel to the beat of the electro show music, “Pyramid (Atoms for Peace Extended Remix)” by Thom Yorke’s Atoms for Peace Project, originally released by Four Tet.

Looks ranging from canvas jackets to cargo pants came with water-resistant Teflon coatings. “It’s a much cleaner silhouette and treatment of the fabric, and a bit more of a minimal approach” than fall ’13, said the brand’s cofounder Marcus Wainwright, who cited Japan as a big influence.

A palette of raven, white, indigo and sage took in shrunken blazers, button-down bombers, shirt jackets, textured shirts, tailored combat pants and even a summer duffle. “It was about trying to twist very classic garments and make them in fabrics where you would never normally see them,” Wainwright said, referring in particular to the sashiko-printed, Baracuta-style jacket and technical military pants executed in a linen and cotton blend.