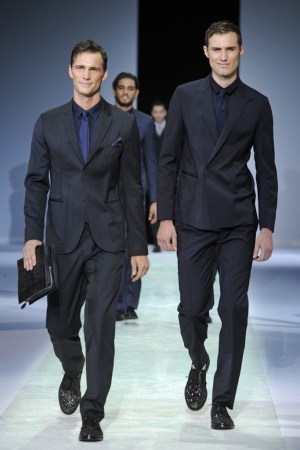 Polish your mirrors and pick up your weights, boys. Giorgio Armani’s spring collection for Emporio is filled with figure-hugging silhouettes for buff bodies.

Armani described the collection as “urban sportswear” and said he wanted to offer a broad range of apparel for spring — not just holiday wear. He also worked on innovative fabric treatments, finishes and weaves, as in curve-hugging jacquard sweaters with digitally inspired geometric patterns, and semisheer knitted sweater-jackets. There were stick-to-the ribs biker jackets in leather, suede or bonded cotton — and wacky sunglasses that covered half the face like welding goggles.

While much of this collection played with slim silhouettes and sheer effects, there was also lots of shine: One dark blue car coat glowed like a starry night, while a motorcycle jacket had a silvery sheen. The palette was mostly navy and white with punches of iridescent fabric in green and pink. In case anyone needed to be reminded of where Armani, king of gray, stands on the subject of bright colors, he told reporters after the show: “Who wears them? Who dresses in yellow or red? They’re theoretical shades — ones that stay on paper.”