The designer displayed a more mature and carefree approach to fashion for spring. 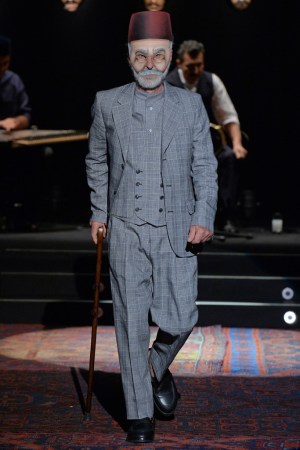 Despite the antigovernment protests in Turkey, and Umit Benan’s own rebellious streak, the designer displayed a more mature and carefree approach to fashion for spring.

For the show, Benan recreated a “meyhane,” a men’s-only Turkish café, where a musician played a darbuka. Treading slowly over carpets, the models, each wearing a cartoonish mask with a fez and moustache, resembled characters of a slightly surreal movie.

The look that opened the show — a three-piece checkered suit featuring rounded lapels and double-pleat drop-crotch pants — set the tone for an elegant yet relaxed collection that included shirts and kaftans with Nehru collars. For the outerwear, Benan shaped suede into a field jacket, a perforated zipped bomber and a trenchcoat.

Injecting an athletic touch into the collection, he also used a perforated jersey with a technical effect for an ample duster, which looked padded, worn with a knitted polo shirt and clean pants.