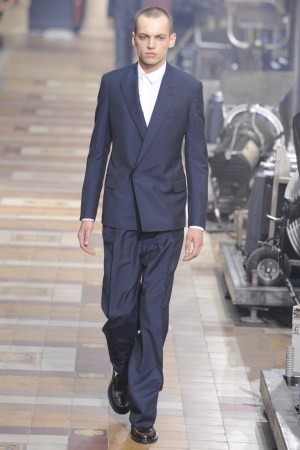 What is formal, and what is informal? That’s a question many designers seem to be grappling with for spring 2014, including Alber Elbaz and his men’s wear designer Lucas Ossendrijver.

“You can’t just hold a mirror to the street,” Elbaz mused backstage. Instead, he and Ossendrijver absorbed athletic and skater influences — which have been seen all over European runways — into their industrial-tinged luxury universe.

There was a common thread between snug three-button jackets — which looked fresh — worn over billowing “Great Gatsby” trousers, and off-kilter jersey T-shirts paired with matching jogging pants. They’re both suits: one for business, one for leisure.

Like other designers in Paris, Elbaz and Ossendrijver didn’t commit to a single silhouette, yet crystallized the quest for youthful tailoring that has defined the season. Jackets ran the gamut from abbreviated and waist hugging to long and boxy; trousers from HotPants short to stovepipe slim.

What stood out across the multitude of options were the sumptuous, often feminine fabrics and a luscious palette: color-blocked shirts in crisp silk-viscose blends, and billowing macs in lustrous bonded wool and mohair. The show climaxed with a parade of athletic tanks and diaphanous varsity jackets streaked with glossy lamé panels, as if the NBA playoffs moved to the Opéra Garnier.