The clothes were way out there: a lineup of infantile rompers with low crotches somewhat reminiscent of 19th-century swimwear. 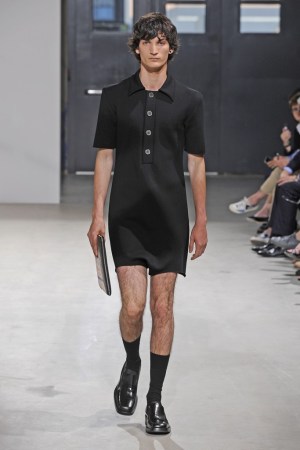 “Fashion has become this uberproduct: It’s not sitting in a corner anymore,” Raf Simons said after his confounding show Wednesday night. “It’s way out there being promoted, adored or hated — like a shampoo.”

The clothes were also way out there: a lineup of infantile rompers with low crotches somewhat reminiscent of 19th-century swimwear — only done in spongy, synthetic fabrics and paraded to the thump of Nineties dance music. Oversize T-shirts and polos came in baby pink or splashed with noisy advertising slogans. They resembled dresses and had an utterly feminine feel.

There were sequined embroideries on knitted sweaters and color-blocked shirts in blinding colors, but little in the way of tailoring or familiar notions of men’s wear.

Simons said the collection was a study of consumer society, which is becoming “more and more artificial, toxic in a way,” he said, quickly reassuring that he was not criticizing, but simply looking for a new aesthetic.

“Freedom of expression versus the mechanical repetition of products,” the designer declared. “We are challenging the audience.”