The designer continued to parade his familiar sports-influenced silhouettes, this time with a more handcrafted, collage-like feel. 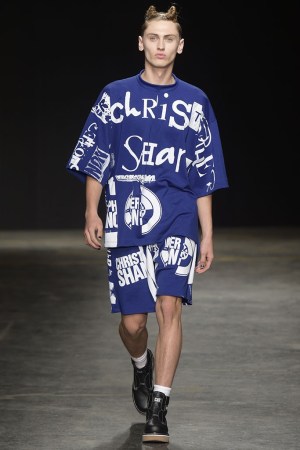 “I was thinking about how you find your teenage identity,” Shannon said backstage, relating how he created a “gallery” in his own teenage bedroom by drawing on the walls.

The show opened with oversized T-shirts, shorts and sweat pants emblazoned with Christopher Shannon logos with the letters made from a jumble of different fonts. There were also youthful nylon separates, such as a cherry red anorak and shorts set, patched with sticker-like images of peace signs and blinking eyes.

Shannon, the winner of the first BFC/GQ Designer Men’s Wear Fund, said he would use the $252,000 grant to streamline his, and launch an e-commerce site in November.