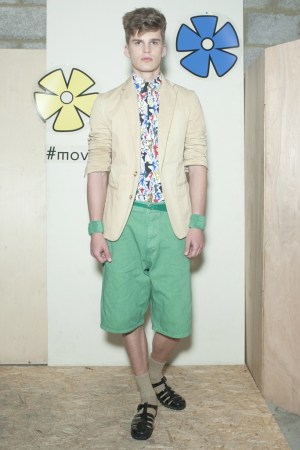 Founder and creative director David Bradshaw also cited the Tate Modern’s Matisse “Cut-Outs” exhibition as inspiration, which was the starting point for an abstract print motif derived from the silhouette of a dancer that had originally appeared in a 1996 shoot styled by Bradshaw for “Arena Homme Plus.”

The motif came in tiny, primary-colored repeats on cotton voile shirts, or blown up in intarsia knitwear. Canvas cut-outs of the shape were crudely appliquéd to knitwear with small stitches. The rainbow bright pieces — like a pair of wide grass-green shorts, a coral appliquéd sweater — were either teamed with neutral pieces, such as a stone blazer or tapered white pants, or worn tone-on-tone.