In his first runway appearance at LFW, Liam Hodges, one of the three designers in the MAN group show, showcased his tough, handcrafted aesthetic. 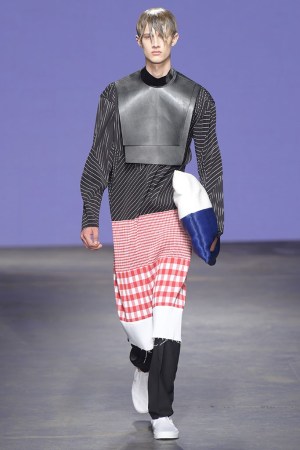 In his first runway appearance at London Fashion Week, Liam Hodges, one of the three designers in the MAN group show, showcased his tough, handcrafted aesthetic. Inspired by “boy scouts…outdoorsy men and spirits of the woods,” the designer’s looks included heavy khaki ponchos stitched with Hodges’ take on merit badges. There were more wearable options too, such as forest green shorts and a T-shirt, worn with a torn gray sleeveless sweater and crystal amulet at the neck.

Bobby Abley sent out a collection of cool, cartoonish looks. Taking his cues from Disney’s “The Little Mermaid,” imagining the kind of prince the character would meet if she washed ashore today. Skate and skirt options included frayed gray denim tank tops and board shorts, or neoprene shorts and oversized T-shirts.

Nicomede Talavera sent out models in tabard-style tunics crafted from patches of black and white check and pleated fabric, over shiny leather pants. Some of the looks recalled the work of another London designer who’s a proponent of blurring the lines between men’s and women’s wear, J.W. Anderson.