Thom Browne opted for a boxing ring instead of a catwalk to showcase the label’s spring offerings. 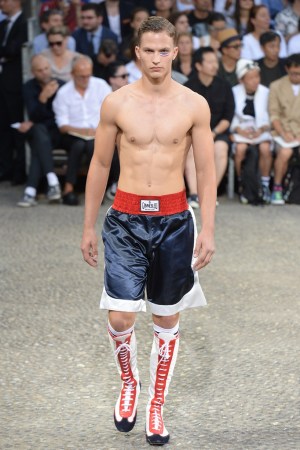 Thom Browne opted for a boxing ring instead of a catwalk to showcase Moncler Gamme Bleu’s spring offerings. The show opened with four bare-chested pugilists stepping into the ring to the theme from “Rocky.” Following several announcements, including the obligatory “Let’s get ready to rumble,” Browne paraded a bunch of athletic-inspired outerwear options, worn on top of the designer’s signature preppy layers — suit jackets, ties and V-neck sweaters. Underneath came boxing Bermudas mixed with mesh leggings.

The hoodie took center stage. Browne featured it on robelike coats and mesh-covered sweater-jackets. Mesh shorts worn over pin-striped tailored pants were simply one wacky example of the preppy-versus-athletic interplay.

Browne sprinkled in a few women’s looks, including a long, ballooning skirt matched with a cropped shirt-jacket that had a fresh, sporty feel.

Backstage, the designer, a jogging enthusiast, admitted he’s no boxer. “But I went to Notre Dame and I’m Irish,” he said, clenching his fists like a real fighter.