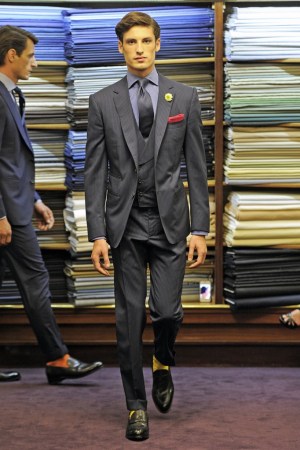 For its first ready-to-wear show, Cifonelli turned its Parisian atelier into an intimate catwalk venue where bespoke tailors Lorenzo and Massimo Cifonelli paraded different variations of the classic man’s suit. Linen, linen-silk and fine wool combinations in various shades of mostly blues and gray took center stage as models moved slowly through the salon to the moody sounds of Miles Davis.

The Cifonellis paired double-breasted jackets with single-breasted vests or vice versa, the latter skewing formal. Pants were narrow featuring no break. This was a small capsule collection of 16 looks, which Lorenzo Cifonelli said would gradually become larger, as more casual and travel clothes enter the picture.