Photographer Slim Aarons served as inspiration for Benan this season. 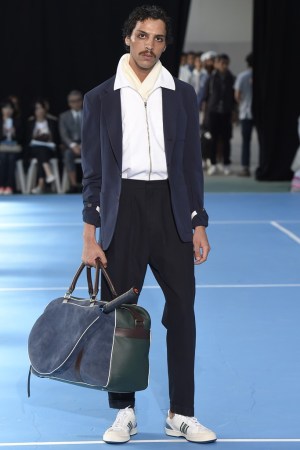 Photographer Slim Aarons, who served as inspiration for Umit Benan this season, would have had plenty of motifs to shoot at the designer’s spring show, set on the tennis court of a fictitious Cartagena country club. Benan’s insouciantly chic pack flashed three-piece suits featuring a bathrobe-y belted jacket or double-breasted blazers with elastic bands around the wrists, allowing these hobby athletes to wear their sleeves half up if needed.

Offering petrol green, cream, tan and various shades of blue, the collection struck a balance between chic and slightly tacky, which is essentially how Benan feels about Latin America, “though in a good way,” as he explained backstage. What lent further authenticity to Benan’s characters was the casting — the designer hired his jet-setters off the street, much like the Colombian mariachi who serenaded the models on the court with his guitar.