Christopher Bailey’s fanciful collection pushed the limits of masculine style with a pile of lace - in all its Chantilly, macramé and Nottingham glory. 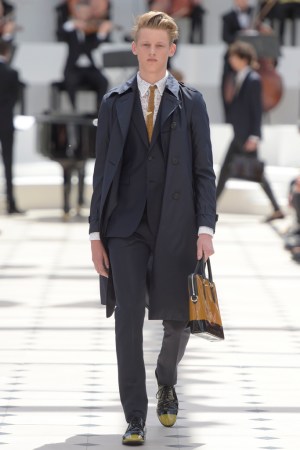 Burberry called its Prorsum show “Straight-Laced” — although it was anything but. Christopher Bailey’s fanciful collection pushed the limits of masculine style with a pile of lace — in all its Chantilly, macramé and Nottingham glory.

The chief creative and executive officer spun it into slim ties and onto trenchcoat collars. He used it for short-sleeved shirts worn under Burberry’s new, slim Chelsea suit, and for sheer T-shirts paired with cashmere jogging pants.

There was lace-on-lace, too, as in a white shirt with a black placket, while the pièce de résistance was a white lace car coat. The lineup echoed the lace-filled women’s pre-collection — which Bailey sent down the runway for first time during a men’s show.

The designer said the collection was about contrasting the formal with the traditional — and adding “a bit of poetry” to the show. But are men really ready to wear so much swirly stuff? Though utterly lovely to look at, it could prove a tough sell.

“Some men will wear it, others won’t,” said Bailey after the show, which featured a live performance by the British musician Rhodes, accompanied by a 24-piece orchestra. “We do have other pieces like cotton poplin shirts with lace plackets.”

Despite the ode to lace, the collection still had a wintry feel, as in a chunky fire engine red turtleneck, long scarves fluttering around models’ necks and quilted or down jackets, clearly speaking to the brand’s global, traveling customer.