The designer took a pared-back approach for her men's debut. 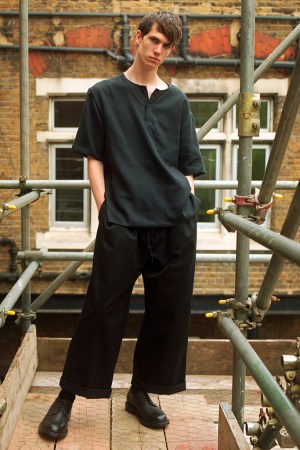 Phoebe English has added men’s wear to her repertoire for spring 2016. “We’ve had quite a lot of men asking us about it over the seasons — it just felt like the right time,” said English.

The designer took a pared-back approach, while adding inventive details. Consider a smock top done in a hardy ticking fabric slashed at the neck, or a mandarin-collar shirt with a loop of fabric buttoned around the waist. English also did oversize trenchcoats in black cotton and cream linen; cropped, wide-leg pants, and a bomber jacket in black moleskin, stitched with an extra internal jacket that ties underneath.

Comparing the collection to her romantic, Gothic-edged women’s line, her philosophy for her men’s customer is more straightforward. “It’s really about making a beautiful product, rather than trying to express a grand vision,” said English.