This spring 2016 collection is timely given a Christmas release date for “Point Break,” a remake of the cult 1991 surf film. 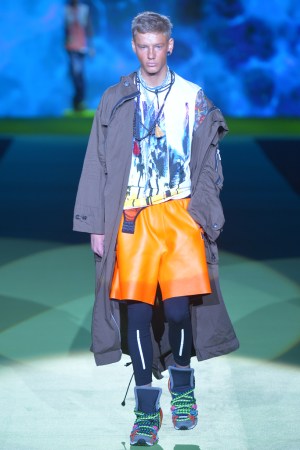 A tidal wave of styling went into Dsquared2’s surf-themed show, the pileups of rugged outerwear and neon-flecked or sparkly tank tops built up from tattoo-print bodysuits — and then stripped off for a racy, nearly nude finale.

It was hard to tell if Dean and Dan Caten’s beach boys — lugging giant backpacks and shod in bulky, cord-festooned wakeboard sneakers — were going trekking or raving. But does it really matter?

The business is hinged largely on denim, and there was plenty of news here. Distressed jeans came mainly slim and cropped, echoing the shape of scuba leggings and leather motocross pants poking out from all manner of baggy board shorts. A dramatically oversize alterna-jean was crumpled and bagged around the knees, bringing to mind snowboarding pants. Dip-dye dégradés, from indigo to white, looked cool on jeans and jeans jackets, some of which dangled denim shirttails.

While every exit was ridiculously overcharged — seemingly pitched to male versions of Anna Dello Russo, who sat front row — one could extract pieces, namely oversize parkas and bohemian leathers. This spring 2016 collection is timely given a Christmas release date for “Point Break,” a remake of the cult 1991 surf film.