Playing with a neo-military aesthetic, Ermanno Scervino sent out light camouflage quilted down pants and Napoleon-style uniform jackets for spring. 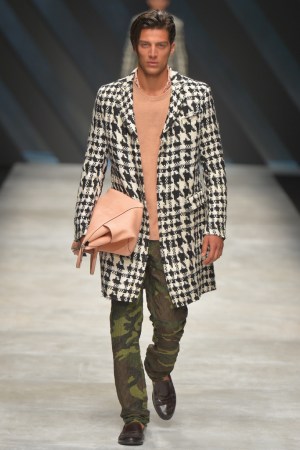 Playing with a neo-military aesthetic, Ermanno Scervino sent out light camouflage quilted down pants and Napoleon-style uniform jackets for spring. He adorned his gentlemanly unit with regimental ties and brooches with tassels and included a series of loosely knit sequined sweaters. Viewing their quirky nature, they could turn out to be a tricky sell. Sometimes the simplest options are the best, as seen on a single and a double-breasted vintage linen blazer, which Scervino deliberately left unfinished around the edges. A volley of fuller suit pants rendered in an understated palette of khaki, gray and blue were on trend, while still reflecting the collection’s warrior-on-leave theme.