Capsule nabbed a slot at New York Fashion Week: Men's and showcased seven emerging designers who will also appear at the trade show next week.

IsSixWeeksAfterFashionWeek = false
By Luis Campuzano and Aria Hughes on July 16, 2015 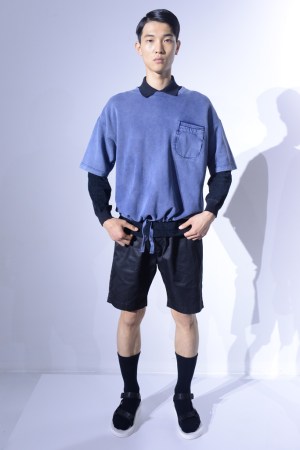 Capsule nabbed a slot at New York Fashion Week: Men’s and showcased seven emerging designers who will also appear at the trade show next week.

London-based brand CMMN explored the concept of real versus fake for its spring collection and this was realized with silhouettes that were purposely off. Cropped jackets with longer sleeves were styled with wide-leg trousers and shorter, slim pants. On the fabric side, technical nylons and latex were paired with organic denim and French terry. It was a nice play on proportion and fabric that made for a strong offering.

Maiden Noir’s lineup was based on atmospheric, landscape photographs taken by Amanda Ringstad. On-trend staples — anoraks, bomber jackets, jogging pants and matching denim coordinates — came in either washed-out fabrics or strong jolts of cobalt and copper. It was a fresh interpretation of commercial pieces.

There was a nautical tone in Baartmans and Siegel’s collection. Coming in various shades of blue, white and gray, the assortment featured a utilitarian jacket covered in an enlarged digital print and sailing shorts worn over chambray styles. The designers updated luxury sportswear nicely with print and texture.

Matthew Miller’s spring line consisted of the idea of taking a classic piece and juxtaposing it in different textures. Some of the highlights included a crinkled suit and a leather moto jacket, giving it a sophisticated look very of the now.

Camo’s collection, entitled “jump,” was inspired by the idea of comfort, modernity and lightness. A standout was an electric blue cardigan, and a pair of seersucker trousers.

Blackfist took inspiration from the Eighties thrash skate scene and the film “The Toxic Avenger,” incorporating colors and textures into dirty denim and Hawaiian-printed shirts.