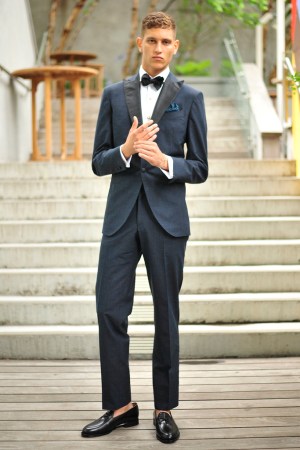 Eidos creative director Antonio Ciongoli channeled Marni chief executive officer Gianni Castiglioni’s vacation home in Spain’s Formentera as inspiration for the brand’s spring collection. Although the house is on an island, the terrain is very desertlike, which influenced Ciongoli’s fabric choices and color palette. Washed-out colors of beiges and light grays to whites were used in traditional tailored clothing as well as sportswear pieces such as bombers, pajamalike shirts and knits.

One standout was a robelike sweater in an ancient Indian batik that was also used on a swim trunk and espadrilles.

Perhaps the strongest marriage of Neopolitan tailoring and the bohemian Spanish lifestyle was seen in a linen and silk double-breasted suit in a full silhouette with a higher rise — perfect for those lazy summer nights.