It was a raucous homecoming for John Varvatos who, after seven years showing in Milan, returned to New York to bring the curtain down on NYFW: Men's. 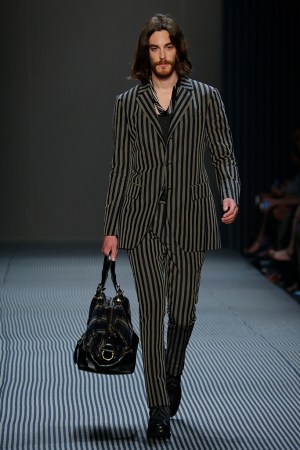 It was a raucous homecoming for John Varvatos who, after seven years showing in Milan, returned to New York to bring the curtain down on NYFW: Men’s.

The designer hung hundreds of umbrellas from the ceiling and wrapped the walls and runway with stripes — a clear indicator of what was to come.

His spring collection centered around stripes, stripes and more stripes that he used in everything from skinny suits and duster coats to high-button boots. The stripes were offered in a variety of colors, ranging from summer whites and olives to eggplant.

“Everything is in such a solid mode today,” Varvatos said. “It’s been that way for too long. I’m trying to be adventurous and playful, everything doesn’t have to be so serious.”

While playful, the collection stayed true to the core of the Varvatos brand with its visible rock ‘n’ roll sensibility. This season, the designer was influenced by the British dandies who emigrated to the U.S. in the Seventies, such as Keith Richards, Jimmy Page and the members of Fleetwood Mac. They settled in Southern California and embraced the bohemian lifestyle, resulting in an “easing up” of their dandy roots to become more relaxed.

Varvatos’ tailored clothing range included a two-tone pique jacket, one- and three-button suits with shawl and peak lapels, and even an indigo-dyed silk tuxedo.

And what Varvatos collection would be complete without a classic leather jacket with hand-staining and patina treatments that take over a week to complete?

In a season full of monochromatic dressing, the all-over-print-stripe story might have felt a bit overwhelming at times, but nonetheless, it was a striking and successful message for Varvatos’ return home.