This effort may have been inspired by suburbia, but Chai's collection belongs in downtown New York City. 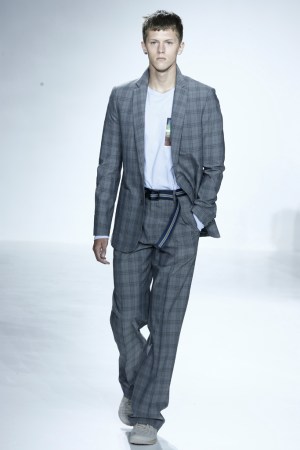 Separating his men’s and women’s collections was the best thing Richard Chai could have done.

The designer’s expanded men’s wear offering, which could easily fill the void left by the closure of Marc by Marc Jacobs, featured an array of voluminous pants and culottes — an emerging trend of the week; head-turning trenchcoats, and softly tailored suits.

The graphic elements were designed to replicate a variety of album covers from Chai’s childhood in suburban New York, including Morrissey and Depeche Mode, and were used on sleeveless shirts and T-shirts. He also used updated pinstripes and plaids, but when mixed with the album-inspired prints, it brought new life to the heritage patterns.

The new play on silhouettes — from the high-waist trouser to the oversize sleeveless tops — gave a sophisticated twist to the youth-infused collection.

This effort may have been inspired by suburbia, but Chai’s collection belongs in downtown New York City.