For spring, the designer dressed his bon vivants in various shades of gray. 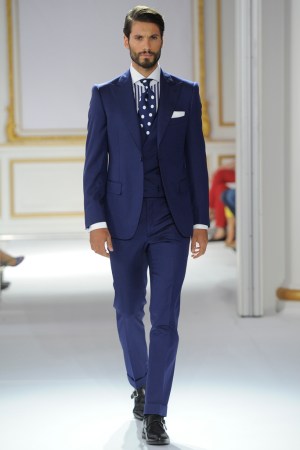 Three seasons into the game and Cifonelli’s creative director John Vizzone has already gained a small yet devoted following for his charmingly old-school chic collection. Vizzone’s recipe is simple: He couldn’t care less for trends, which this season have been all about a slouchy, laid-back aesthetic. His home turf is the traditional dandy with a penchant for three-piece, pinstriped or checkered suits and fitted silhouettes.

For spring, the designer dressed his bon vivants in various shades of gray, ranging from cool, smokey hues to warm blue coal, which mixed particularly well with a run of whites that created a serene and noble atmosphere, as models strolled down the runway to the tunes of bossa nova.

The Cifonelli man’s sole extravagance it seemed was a handkerchief flying nonchalantly off his breast pocket as well as an eccentric tropical print, which when used on a double-breasted evening jacket conjured the image of Cary Grant sipping on a mojito in a Cuban bar.