The collection spoke to the common cultural codes between Italy and Russia. 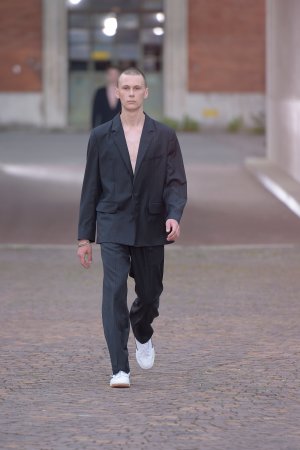 Set against the backdrop of an abandoned tobacco factory from the Thirties, Pitti Uomo guest designer Gosha Rubchinskiy said his collection was an ode to the common cultural codes between Italy and Russia.

The dilapidated fascist architecture jibed well with the raw attitude of this street-smart offering that boasted the designer’s signature retro-tinged handwriting.

“Thirty characters, 30 outfits,” he said during a preview — and shown “on real people,” which he cast through Instagram from all over Europe and beyond.

“With all that is going on in Russia and Britain, I think we need to move closer together, and fashion is a good [vehicle] for that,” he said.

Many pieces were done in collaboration with iconic labels from the Nineties such as Sergio Tacchini, Fila, Kappa and Levi’s, further feeding into the lineup’s time-capsuled aesthetic that was also accentuated by high waists and cropped silhouettes.

But the Gosha teenager made it clear: He also wants to be a man. The boxy suits — pinstriped and done up in cotton-linen blends or technical fabrics — looked as if he had stolen them from his dad’s closet. Mixed with metal chain necklaces they oozed a natural bad-boy feel.

Though the 31-year-old designer did not reinvent the wheel with this collection, his story felt relevant. Love it or hate it, the double-breasted jacket in lipstick red corduroy was a showstopper.