The collection offered up a New York underground Seventies mood, which just might be another hint to his next job. 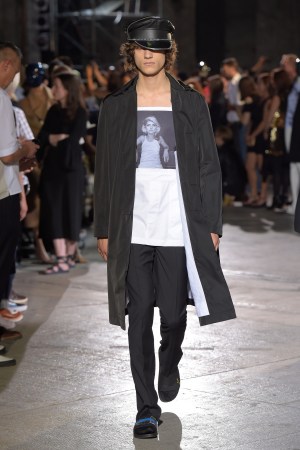 For his return to Pitti Uomo, Raf Simons transformed Florence’s Stazione Leopolda into a Nineties-inspired warehouse rave with colored spotlights and electronic music. Distressed old mannequins were installed to showcase a range of men’s pieces from the past collections of the label, which celebrates its 20th anniversary this year.

The music from the “King Arthur” opera suddenly introduced the runway show, which paid homage to Robert Mapplethorpe’s work.

“I was contacted by the foundation, usually it’s me contacting the artists,” Simons said right after the show. “They wanted to see if these could be transported to another field or medium.”

The designer had access to the photographer’s complete archive and selected images from different periods of his career — including portraits of Patti Smith, self portraits, still lives — which he translated into prints on oversize cotton shirts, apron tops and apron skirts layered over slim pants.

Everything exuded a New York underground mood, which continued with exaggerated, distressed knitted sweaters imbued with a certain sensual feel. Pictures of antique statues were juxtaposed with explicit sexual images that served to enhance the provocative attitude of a collection that, while being celebratory, also reflected Simons’ ultracool aesthetic.

With all the rumors on Simons’ possible move to New York to take the reins at Calvin Klein, this collection might be seen as a first step toward the Empire State.