The collection was called "Fritto Misto" and inspired by road trips through Italy with the designer's girlfriend. 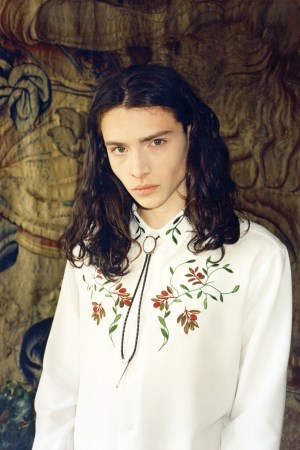 Now in its third season, Bruta, designed by the artist-turned-designer Arthur Yates, features unisex shirts with playful kitsch. The collection was called “Fritto Misto” and inspired by road trips through Italy with his girlfriend.

Sicily got a shout-out via two Maiolica patterns in primary hues on a white shirt, while a series of Medici family heads appeared on another. The reclining figures of Michelangelo’s “Dawn” and “Day” sculptures and Botticelli’s Venus all had their moment, too.

There were button-front T-shirts in the mix, one adorned with curling strands of spaghetti with tomatoes, and another embroidered with flamboyantly gesturing soccer players like Dino Baggio and Paolo Rossi. Both were standouts.