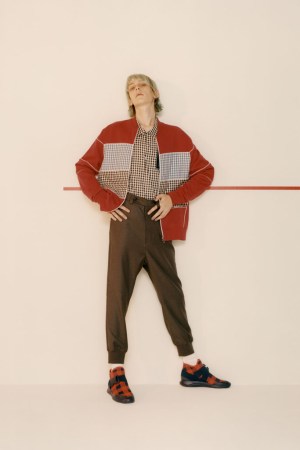 Terrorism and violence are unfortunately becoming the new normal as seen in the weekend’s nightclub massacre in Orlando, Fla., and the hooliganism that marred at the opening Euro 2016 match in Marseilles, France.

Christopher Kane said he witnessed his own share of gang behavior and stadium slugging while growing up in Glasgow, Scotland. He is also fan of crime dramas, particularly forensic ones — no surprise given his fascination with scientific themes.

Cue “Law and Order,” the name for his spring collection that spanned parkas printed with firing range targets, T-shirts splashed with thermal imaging, and prison smocks in the same pink tones meant to keep inmates calm.

The combination of vibrant print and oversize shapes added up to a graphic cool, but were in no way meant to glamorize violence, Kane stressed. Indeed, giant pansy motifs on sweaters — a carryover from Kane’s women’s resort collection — resembled the swirling colors of those thermal surveillance images on oversize sweatshirts and Windbreakers.

The collection also included homespun gingham checks, cut into crisp and square shorts and shirts, just like the ones Kane’s childhood friends wore on TV nights. “Crimewatch and casual,” he said.