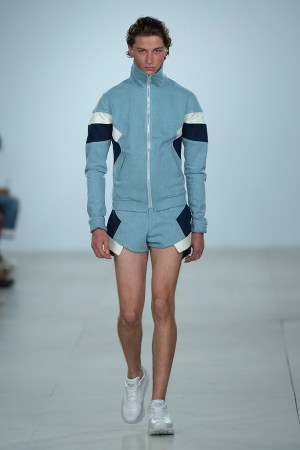 The designer took that idea in a fun, experimental direction. He rendered an Eighties-esque funnel-neck leisure suit in dark denim, inset with chevron stripes in lighter denim washes, while a pair of Nineties-style baggy jeans were fashioned with three trompe l’oeil waistbands, stacked one on top of the other. More out-there still — a denim jacket and jean combo that was stitched with scores of sprouting belt loops, a pair of jeans re-imagined as denim shorts and slouchy denim leg-warmers.

Cheeky takes on logos have long been a part of Shannon’s aesthetic, and this season he took a swipe at the branding of the British activewear retailer Sports Direct. The designer worked up T-shirts and sweatshirts bearing the slogans “Haters Direct” or “Lovers Direct.” It was a timely parody on Shannon’s part, given that the retail giant’s founder Mike Ashley is currently being quizzed by British politicians over his firm’s alleged underpayment of its employees and working conditions in its warehouses.