No stranger to voicing his political views, Daniel Fletcher's show took the form or a flash protest in support of remaining in the European Union. 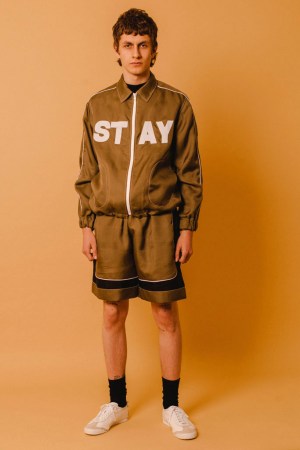 No stranger to voicing his political views, Daniel Fletcher staged a flash protest in support of remaining in the European Union as part of his show. Britain’s EU referendum takes place on June 23 and passions are running high on both sides of the debate.

The designer stood on the sidewalk in front of 180 Strand, the London Collections: Men official venue, together with models dressed in pieces from his spring range. He also tapped friends, and his younger sibling Abbi, to take part. Models held signs and blankets with slogans such as “Stay” and “Better Together.”

Dressed an olive velour suit with the message “Stay” emblazoned across the front of his bomber jacket, Fletcher spoke freely about the so-called Brexit vote.

“For me, the Brexit debate raises so many issues,” he told WWD. “I feel like our generation and the creative industries and me and my friends all want to be heard, and this was my opportunity to stand up for something I believe in and to say to the world and to the people who aren’t politicians that we actually have a voice. And we believe that we should stay. It would be such a cultural blow to this country if we were to leave the EU.”

Fletcher also created a film that explores his views. It features eight boys who set up a protest camp and aims to encourage voters to stay in the EU. The four-minute film premiered over the weekend at the River Island x BFC Fashion Film event, also at 180 Strand.

The designer stressed, however, that he is still in the business of making and selling fashion. Like so many other designers this season, he even showed some women’s looks along with his men’s wear collection. “It’s designed as a men’s collection, but when we were casting it, I really wanted my friends and people who I know to be part of it. That’s why there is a mixture of boys and girls, I would say.”

Fletcher, who works with Kim Jones on Louis Vuitton Homme, described the collection’s mood as British holiday-maker. “You can see them wearing these printed jackets and shorts and the neck ties — something that a British person would wear if they were visiting these countries in Europe.”

There were no tacky tourists here. The result was a smart mix of sporty streetwear clothing rounded out with classic tailored pieces.

Fletcher played with proportions, taking his signature pajama pants and giving them a roomier fit. He introduced tailoring for the first time in the form of a reversible jacket some with visible seams or stripe embellishments running down the sleeves. A monogram of Fletcher’s initials in red white and blue, created by the illustrator Sung Woo Kim, were transformed into a print that was cast onto shirts.