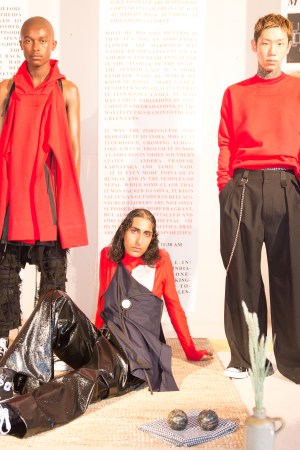 Rarely does one get to have a proper belly laugh at a fashion show. Rarer still for the mirth to arise at a Fashion East collective showcase, home of London’s most promising emerging talent. But the Rottingdean Bazaar offering was silly enough to prompt a big laugh. Theseus Buck and Luke Brooks, both graduates of Central Saint Martins, fused everyday items like Y-fronts, terry towel hotel slippers, nylon stockings, real pressed flowers — or slivers of carrots — onto the fronts of white T-shirts and sweatshirts. The most droll? A portrait of Che Guevara made from their own hair cuttings. It was obscene, but rather fun, and it will be interesting to see how the two develop. Ah, the fashion youth of London.

Another designer, Luke Stevens, who has yet to graduate from the Royal College of Art, was also inspired by the mundane things in life, incorporating the foam padding from his chair at the RCA into a breastplate that came balanced on a model who was lying on the floor. Said model was wearing jeans made from silver foil Mylar and a shirt made from the white mesh used to encase scaffolding. The Mylar was used in another pair of jeans of dubious functionality that morphed halfway down one leg into another pair of jeans, the latter ones cut from plastic wrapping — and pooling on the floor. The combination of textures was nice, but it would have been better to see a more wearable offering.

Rory Parnell Mooney slowly introduced color into his aesthetic lexicon for spring – khaki and red to break up the predominantly black and white scheme. There was a nice play on texture in the shiny black PVC coat that came with hairy frayed jeans and a tie-neck gingham shirt. The black wide-leg pants that came with a red, embroidered sweatshirt and a dapper pocket watch chain were nice reminders of Parnell Mooney’s tailoring skills.