John Smedley has a heritage of British craftsmanship to reconcile with its contemporary ethos. 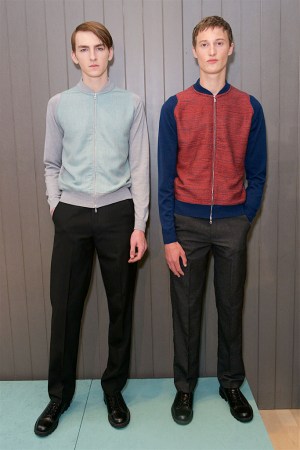 While collaborating with more directional designers like Lou Dalton broadens its appeal, John Smedley has a heritage of British craftsmanship to reconcile with its contemporary ethos.

For marketing and design director Jess McGuire-Dudley, it’s all about nuance. “Our men’s silhouettes are universally known so we use the construction of the knit itself to keep things fresh — playing with surface pattern techniques like different stitches and intarsias.” These are made more accessible, she noted, via a tonal color palette.

Inspiration for spring came from British Brutalist architecture associated with the works of Sir Hubert Bennett and Simon Terrill, with the movement’s hard lines referenced in diagonal patterns and chevrons woven into the knits in both subtle pastels and more vibrant pops of blue and orange. The latter evoked a stairway in the middle of the Tate Modern, formally Bankside Power Station.

There were also four limited-edition pieces, including a new bomber jacket shape. The label worked with a scholar from QEST, which stands for the Queen Elizabeth Scholarship Trust, to develop the jacket, which involved hand weaving herringbone pattern panels using an original loom from the 1800s. Each jacket took four days to make.

Another novelty was an Italian polo shirt shape with a smaller, neater collar, while a co-ed cast of models showed that despite the new women’s wear line, women still buy into men’s.