Inspired by traditional workwear such as military uniforms or overalls, the line mirrored the women’s resort collection which followed the same theme. 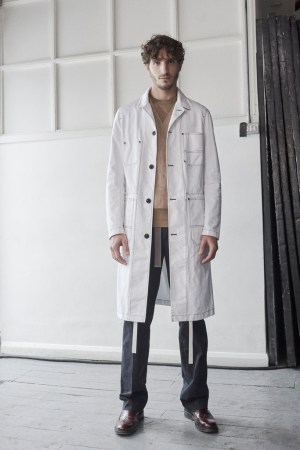 Head men’s designer Mark Thomas and his team have been busy developing the character of the Joseph man. Inspired by traditional workwear such as military uniforms or overalls, this polished line made for life in the city echoed the women’s resort collection.

“This season we really see this new, quite relaxed and unfussy collection with lots of summer layering. Everything is either washed or treated as a finished garment to give this feeling of something that is quite relaxed,” Thomas said.

The brand took it up a notch with technical details and a neutral palette of white, blue, khaki, clay, steel and ochre.

Zipper details were prevalent, on a bomber jacket done in a linen and cotton mix, or affixed to the shoulders of a sweater.

Sheepskin was washed or broken-in to give it an aged effect for a reversible jacket and vest, while traditional argyle patterns were reworked: The brand played with scale and blended large and small diamonds on sweaters and T-shirts. There was a whiff of workwear in a cotton jacket with white top-stitching details and a trench done in lightweight parachute cotton.

During its presentation, the brand screened a three-minute film called “Everyman.” The short opened with a contemplative man starting his day in the bath. He then travels across various parts of London — including Oxford Circus and a park — dressed in a range of clothing from the collection.

He dons looks such as a trench over blue jeans, a mustard knit sweater over navy trousers, a cream vest over a white T-shirt, and a green overcoat with a crisp white shirt.