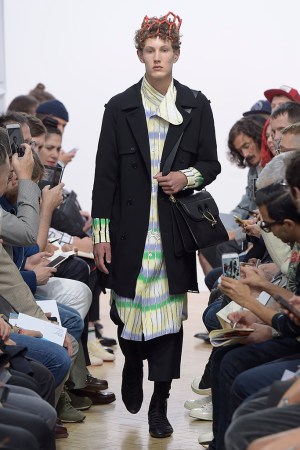 A little prince falls to Earth from a tiny asteroid. No wonder Jonathan Anderson was smitten with the bittersweet narrative of Antoine de Saint-Exupéry’s famous novella, pouring its intergalactic fantasy — and the protagonist’s naiveté — into his fascinating yet challenging spring collection.

It’s easy to imagine the young royal wearing J.W. Anderson and wandering the desert in breezy linen caftans with spray-painted seams; satin jumpsuits with utility pockets and jaunty hoods, or culottes topped with a big patchwork shirt with a padded bib.

(It’s also easy to imagine those attention-seekers coagulating outside of show venues immediately adopting the gogglelike aviators and two-tone Dr. Seuss sweaters with sleeves dangling to the ankles.)

Anderson remains uncompromising with his androgynous view of men’s wear, styling many looks with glossy shoulder bags, which models toted the way a woman would.

Fey, too, were the shrunken trenchcoats, the slim house dresses and the arty smocks in loud puzzle prints or gorgeous sunset degrades. Masculine touches included military bombers and trenches with dropped shoulders and puffy sleeves, and the Nirvana plaids fronting big shirts or slim tunics. Sweater sleeves occasionally wound around their hips and dangled down the front.

Here were plenty of ideas on which many other designers will feed and translate into more wearable versions. To be sure, the culottes and those long, loose tunics are bound to be influential. Kudos to Anderson for continuing to dare — and for breaking free of retro retreads of past seasons. Backstage he talked about his wish to “escape nostalgia, because maybe that’s boring.”