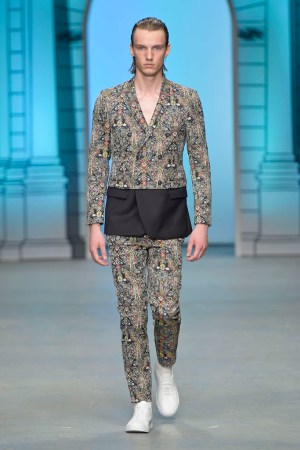 Tiger of Sweden designer Andreas Gran took his cues from the Sweden’s royal palace, Kungliga Slottet, for lineup inspired by the palace’s Rococo interiors and garden flowers. He worked with Loro Piana on an eye-catching jacquard pattern for tailored suits, lightweight jackets and other outerwear. Playful stripes, meanwhile, were cast onto trousers, jackets and shirts.

To balance all the rich, opulent patterns, he also sent out minimalist silhouettes for tailored clothing. Suits came in neutral tones, such as warm browns, navy and gray. He also played with graphic black and white for coats — long and short — layering them over white poplin shirts and matching sneakers.

“We played a lot with classic tailoring pieces, and also some street wear,” Gran said. “For me it is very important. Sweden has become a multicultural country with all of the immigration coming in, so the third culture. People are coming from one culture, then move to another culture and then they create a third culture. That is what is interesting right now, the third culture, they are the most creative and interesting people of our country today, and we want to salute them.”