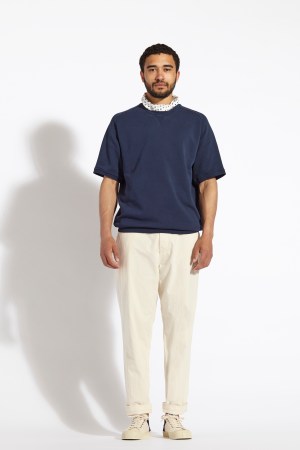 “I was inspired by a book by an American photographer called Burt Glinn,” said Universal Works’ David Keyte of his label’s collection. “He was at a party in New York in 1959 and heard there was a revolution in Cuba so he got on a plane with his camera to find Fidel Castro.”

The idea played out with a blend of military and Caribbean references, a simple proposition nicely executed. Relaxed tropical suits came in overdyed cotton poplin, while overshirts and cargo pants done in dusty shades of olive and sand took their cues from the military. Other shirts featured splashy palm prints that looked to Cuba’s tropical vibe.

And as for the models, they were the Universal Works employees. Keyte himself led the way, wearing a checked, zip-up jacket done in a lightweight tropical wool.

The show’s backdrop was a charming, stop-motion animation by the filmmaker Allan Buxton that featured models interacting with cutouts of their own silhouettes. It was influenced by the antiestablishment Beat Movement and the work of graphic designer Saul Bass.