The mood of the show — Grace Wales Bonner’s first full outing of men’s and women’s wear — was eerily serene and a fitting backdrop for this spare, poetic collection. 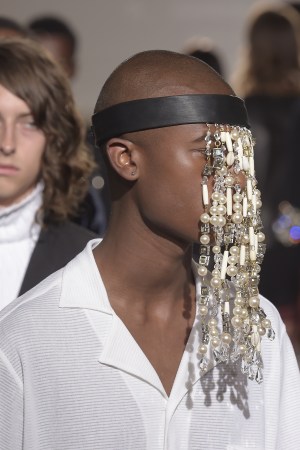 The mood of the show — Grace Wales Bonner’s first full outing of men’s and women’s wear — was eerily serene and a fitting backdrop for this spare, poetic collection that conjured the messianic figure of the late Ethiopian emperor Haile Selassie.

Men’s and women’s clothing appeared side by side, and it was often difficult to tell which was which in this collection that was filled with fine tailoring and narrow, nipped and elegantly elongated silhouettes. A palette of cream, white and black only added to the ecclesiastical air of this collection.

There were frock coats with cropped sleeves showing off delicate wrists and arms, while a cream narrow-waisted suit was paired with slim trousers that grazed the models’ ankles.

Separates came in the form of a starched and long white poet’s blouse that was layered over narrow dark trousers; a long knife-pleat kilt, and a lineup of black preacher’s coats, which were often paired with white, high-collared shirts or ones with sculpted ruffles or stiff cravats.

Wales Bonner embellished judiciously — and, boy, what an impact it made. Embroidered trouser waistbands flashed from beneath slim and sober jackets, while tiny white seashells and beads were dotted across a short, dark cape.

Colorful crocheted collars adorned a leather jacket or a crinkled, shiny black coat; while colored trinkets, meant to mimic ceremonial honors, dangled from the breast of an austere black tailcoat.

Wales Bonner said she wanted to put the marriage of European tailoring, Carribbean influences — such as the crocheting and homemade-looking handwork — and the spiritual figure of Selassie under the spotlight and explore “how you find some sense of identity.”

Let’s hope this thought-provoking journey has only just begun.