Ximon Lee played with the concept of hardness for his spring catwalk outing. 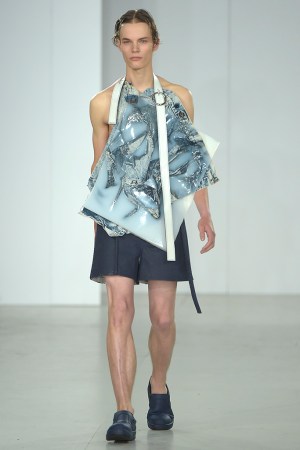 Ximon Lee played with the concept of hardness for his spring catwalk outing, his first in London after his presentation debut in Paris last season. So, hard, as in the physical sense of rigidity and also in the sense of difficulty. He continued last season’s theme of childhood, evolving it into a comment on the process of growing up. “It’s also a joke on hardship,” he said after the show. “It is hard to make a collection, it is hard to grow up, it is hard to admit you are losing things.”

He used the shape of a grocery store carrier bag to inform long pinafore layers in stiff PVC fabric, and used actual black bags fused onto a sweatshirt with silicone panels, and a text warning against suffocation appeared as a print in the collection.

Strongest in the lineup were the oversize jean jackets that came in heavy coated cottons or acid wash denim, some with wide trailing ties, others with open seams between the waistband and back. Less appealing was Lee’s return to silicone. It looked disturbingly surgical in places and just unwieldy in others.