The label's creative director Fraser Moss was influenced by Africa, and its impact on British culture. 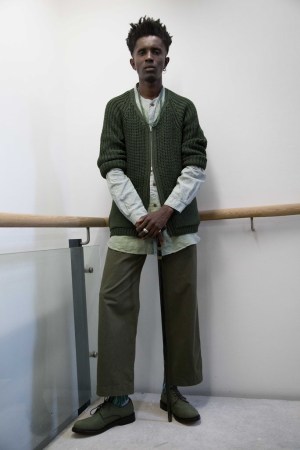 You Must Create’s cofounder and creative director Fraser Moss said he wanted this collection to embrace Africa and the continent’s “influence on British culture.”

Inspired by everything from photographer Malick Sidibé’s Sixties images of young, trendy Malians to the African music that Moss — a self-confessed “vinyl junkie” — collects, he whipped up a laid-back yet distinctive lineup.

Easy, low-key shapes were enlivened with sun-bleached colors and eye-catching patterns. One suit with a collarless jacket and wide-leg, cropped pants came in faded pink linen, while another suit with short pants was done in a washed-out blue, white and black stripe.

YMC’s staple utility pieces, meanwhile, lent a street edge, as in bomber jackets in Army green and slouchy parkas. And to underline the collection’s cross-cultural appeal, the band Ibibio Sound Machine, who describe their music as “a clash of African and electronic elements,” provided the soundtrack to the presentation’s tableau of models.