The emperor had no clothes at the first Billionaire outing under new owner Philipp Plein. 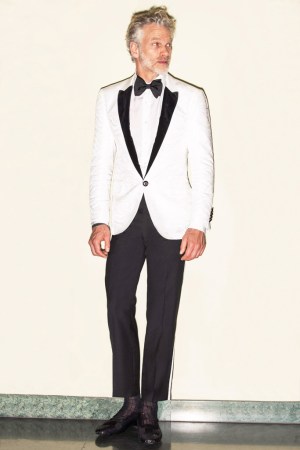 The emperor literally had no clothes at the first Billionaire outing under new owner Philipp Plein.

The presentation-cum-performance, in a grand 19th-century palazzo on Corso Venezia, conjured the creepy sex club scenes from the film “Eyes Wide Shut” — including flickering candelabra, masked guests — and naked men and women on display. Good thing the weather turned warm on Monday, otherwise there would have been a lot of goose flesh.

Guests were required to wear black masks, while an emcee urged them to “forget who you are and surrender yourself to the experience.” They wandered rooms and saw actors engaged in a variety of rich man pursuits. One actor carried a falcon on his arm, while two men in blue blazers engaged in a bit of fencing as a naked young woman in high heels looked on. Nearby, a tattooed male model, not a thread of clothing on him, posed under a flash photography umbrella.

At least some of the actors wore clothes from the collection — dinner jackets and tailcoats done in swirling jacquard patterns such as a micro-leopard print. Some of them sparkled with metallic threads. There were croc trenches and motorcycle jackets, a suit with shorts in a camouflage pattern and navy blazers with crests. According to the show notes, these clothes are “a celebration of success…the ultimate expression of cocksure style.”

The notes also pointed out that the collection was designed not by Plein, as originally reported, but by Plutus, “part man, part machine, a mysterious robotic entity…who is ready to unveil a new era in men’s wear.”

Maybe next time Plutus can find the microchip that makes him realize that the point of a fashion presentation is to see clothes, not naked people.