The Forties was his touchstone decade this time. 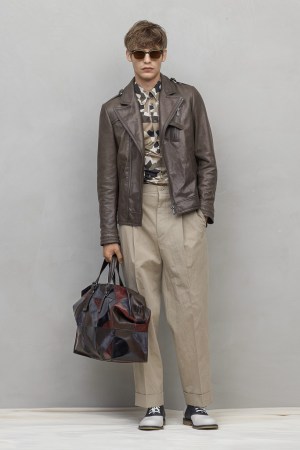 There is rarely a whiff of any androgyny at Bottega Veneta, where Tomas Maier plies lived-in-looking, resolutely masculine fashions that are nevertheless painstakingly detailed.

The Forties was his touchstone decade this time, telegraphed by roomy pants that puddle over two-tone saddle shoes, and a borderline-drab wartime palette. Tailoring in lustrous cotton blends or deliberately rumpled, metal-flecked linen had the same slouchy and elongated line as his fall 2016 collection. Workwear details like utility pockets, metal studs and leather patches tempered the luxury factor of the sportswear.

The brand’s signature braiding sprouted over brogues, biker jackets and blousons, adding texture to pockets and yokes on clothing. Puzzle-like patchworks on leather blousons recalled the Seventies, as did camp shirts and donkey jackets in a polyester doubleknit. While some of the clothes were overcharged with crinkling and patchworking, Maier nailed it with the quiet chic of a languid, beige silk trench, or a crisp uniform-like shirt tucked into those big pants.

The designer displayed his spring 2017 effort on racks at Bottega’s Milan headquarters, and will parade it alongside his women’s wear effort in September — the latest convert to coed shows. With the exception of a petal pink tracksuit, his boys will be boys.