This was the first time the bespoke specialist from Paris presented its ready-to-wear line in Milan. 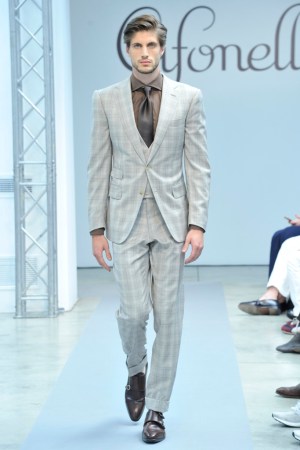 The only element giving away the summer theme at Cifonelli was a gentle Cuban tune playing in the background. For the tailoring house steered clear of obvious Caribbean colors and prints, and said it all in with the cut instead.

The pants were fuller on the thigh but ran narrow around the calves before ending in a handsome cuff that anchored the hem. One could imagine them on Beau Brummell hanging out at a colonial terrace in Havana. Open shirts with generous collars  folded handsomely over double-breasted windowpane suit jackets and light, summer velvet evening blazers boasting rounded lapels.

Some of the shirts were done up in fine antelope leather, which looked cool and easy when tucked into a pair of high-waist silk gabardine trousers. “I didn’t want anything fussy. I also didn’t want any pretty boys but real men with beards. Look, this one here for example is a helicopter pilot in real life,” explained John Vizzone, Cifonelli’s creative director.

This was the first time the bespoke specialist from Paris presented its ready-to-wear line in Milan. “After three seasons in Paris, we felt that our competition, which includes brands like Zegna, Brioni and Kiton, was here, and so it felt right for us to be here,” Vizzone explained.