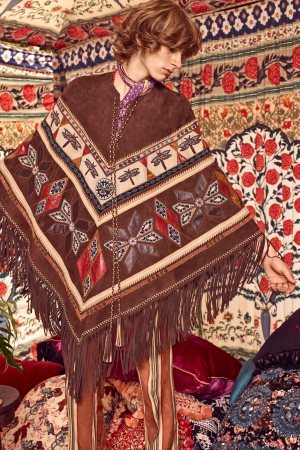 Seventies-inspired silhouettes were combined with decorations that referenced both South American and Native American iconography in a lineup that exalted the brand’s high-end craftsmanship. This was especially apparent in the patchwork leather jackets, as well as in the embroideries and intarsia that appeared on tops and outerwear, all paired with slightly flared pants. Balancing the ethnic, Bohemian feel, which reached the climax with sensual silk kimonos, caftan shirts were paired with corduroy pants, while tailoring was developed in elegant three-piece suits.